Wow! a Tuesday night early Wednesday morning Work.in.Progress Wednesday update...probably one of the very few :) I usually do mine on Wednesday afternoon! Will link up with Lee from Freshly Pieced later today.

It's been a busy sewing week. I think the Curves class has added to that, but enjoyably so, well mostly enjoyable!

Thursday, and part of Friday, I worked on the Clamshell Table Runner. That was fun!

Then for the next three days, I worked on the Improv curves project that involved a tree - not a great success, but Chad didn't mind it. I told him I might just finish it for him to hang in his office :) 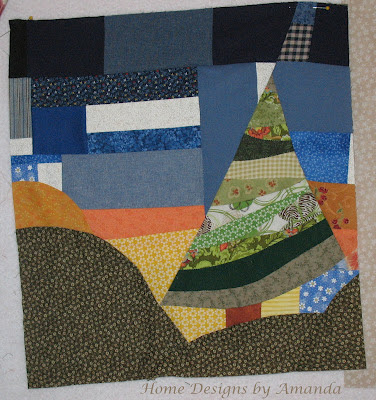 I like the tree...not so sure about the hills :)

Since that project was done, I decided on Monday I wanted something more...um...personal, easy, less pressured...I'm not sure what to call the feeling, but it made me start a quilt that I had the idea for and designed on the computer in MAY 2011! I've even had the fabric since then...it was easier to not use it in other projects because it's flannel and was already labeled for this quilt!

I named it 'Log Cabin Block Chairs'. The idea came while I was in the nursery at church and playing blocks with one of the little girls. We had them set up in the configuration that the Log Cabin blocks make and they looked like big, boxy chairs. I decide that flannel with a fleece backing would just seem to fit this pattern.

So, I FINALLY cut into it... and now this pile of flannel is at the end of my work table and I have one block done. 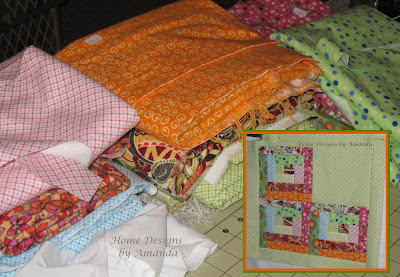 However, there are a couple of design fixes, so this one block will be slightly off from the rest that I make...it'll probably end up on the back or as a doll quilt for the girls...or maybe even for the little one that help develop the idea...hmmm...she'll be turning 3 in June :)

Cutting and sewing Monday was a great relaxation. No time pressure. A great feeling of personal design...even if it is using a basic and classic base as the main design element :) ...and it's really nice to be able to sit down and make the changes on paper the computer before going and mass cutting the rest of the pieces!

It was great to get started working on a good sized quilt rather than just all small stuff...but tomorrow I also get to start a lap quilt for Curves Class - this is really exciting!!!

Tuesday, I worked on some DP practice pieces for Curves Class. I made three blocks, but only finished one completely. 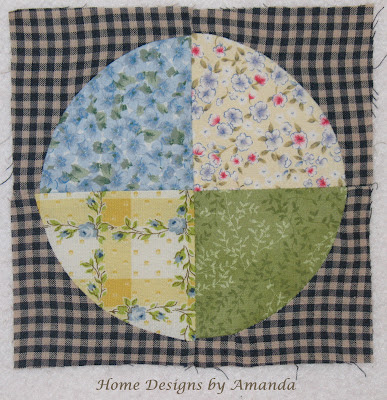 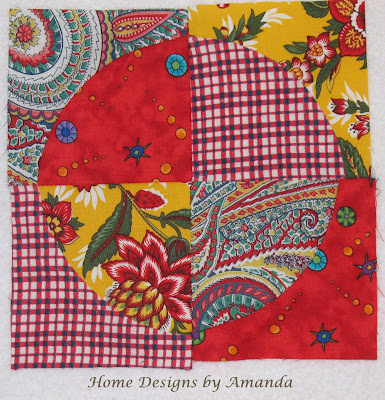 My second is also the one I decided to finish because while sewing it together I had an idea for FMQing it and wanted to give it to Chad as a new mug rug for his office desk... so, now he can take it to work tomorrow :) It finished at 7.5" x 7.5". 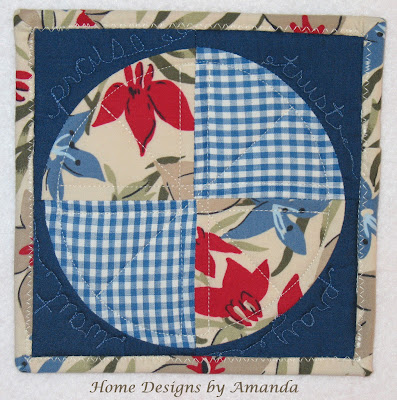 ﻿Really enjoying that my FMQing is going so much nicer... maybe I should have had my machine looked at a long time ago ;0) ...however, my 'a' still didn't get closed in 'praise' - so, I still have something that needs worked on. LOL!

Completed Projects: 3 ...well, at least the tops of the first two...

The Thessalonians had a REAL faith in Jesus and they did not hide it. It was known everywhere that they were believers of God and trust Him.

If we are Christians, true Christians, bought by the blood of Jesus and His victory over death in the Resurrection, then shouldn't we be living lives that reflect the virtues of Jesus...and that they'd be so evident that we wouldn't even need to say anything?

Preach the gospel, and when necessary, add words.