Today is time for another WIP Wednesday with Lee over at Freshly Pieced. It has been quite a few weeks since I have been able to post about this...but today I'd like to START OVER!

The projects I had been working on are 'forgotten' and I'm ready to start new things in anticipation of our county fair (end of August) and my favorite season...Autumn! I even tried to have my youngest daughter named that (she was born in November)...but that was a no...but Amber is a nice fall color!

OK...so on to my projects!
The Patio Table reveal... 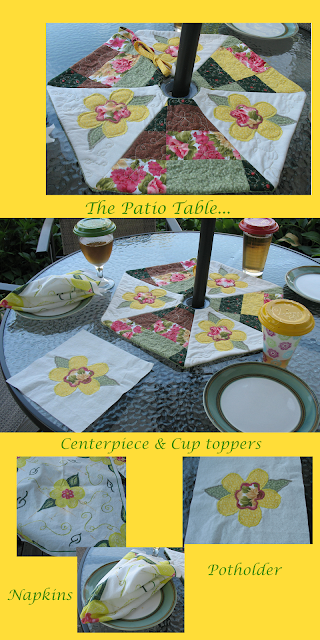 The whole project is NOT complete, but I am tired of working on it...so I'm marking it as done and moving on. The centerpiece turned out very cute and my cup toppers are done...but the napkins need trimmed (to prevent fraying), the pot holder is only a top, and I didn't even get started on the napkin ring holders.

I was also planning to write up a pattern to sell on my Etsy site, but my ambition to accomplish the writing of it is gone...maybe it will be something for another time!

Yesterday, I was able to do head surgery on a horse...he is back to happily galloping around my living room...I'm not sure what kind of accident he had while I was away, but he is all better! 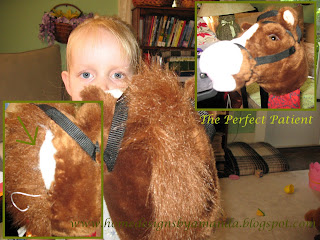 I did very little sewing at camp...but a little is better than none! I'm so excited to have one star all done...only 6 more to go!﻿ 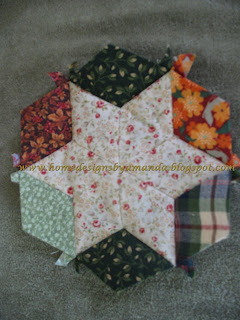 I think it was about a month ago when Traci at Stolen Moments decided to host a 'informal' Sew-along for quiet books. I loved the preview pictures and joined the fun...and on Friday we were to show our ideas...I realize I'm a little late, but hey, I was gone for almost a week!

I'm still in time to join the link for this post and so I can show you my ideas for Liz's quiet book. I'm planning a Season's Book with 8 pages...2 per season! 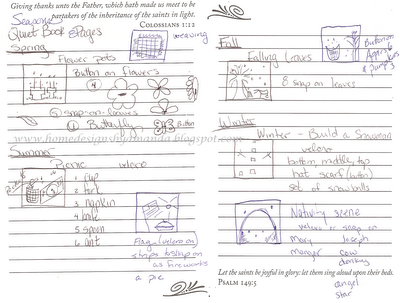 I sketched about half of them at camp and then the others when I choose to go with a theme...that was kind of easy since I already had each season!

I bought some buttons, now I need to pull some fabric and get started.

The little sewing I have done this week has been on some (very late) Father's Day coasters...I decided to make them the day before Father's Day, so they have been cut out, just need some sewing time. I hope to finish them by next weeks WIP!

Also, I've added my musings to these lovely linky parties for this post...

Labour not for the meat which perisheth,
but for that meat which endureth unto everlasting life,﻿
John 6:27a
Amanda﻿